…these are just a few of the words that practical cattlemen from across Canada use to describe Herefords.

Today’s practical cattleman is faced with ever increasing input costs. Costs like feed, labour, and animal health. In the past the solution has been to maximize production, but that doesn’t always work as this also means maximized input costs. Mature size, dystocia, temperament, foraging ability, feed conversion, hardiness all affect the amount of inputs required. Today’s practical cattlemen is faced with the challenge of maximizing profitability by minimizing inputs through optimized production.

Herefords have what the feedlot, packer, and most importantly, the consumer are looking for.

Herefords…optimum production for maximum profitability. What this means is that all things considered Herefords produce more calf for your buck. How do they do it?

Dorothy Rossiter, Westrose, Alberta – “We find that the Hereford cows cost less to feed and they still put out a good size calf.”

Eric Lawrence, Maple Creek, Saskatchewan – “Herefords do well in our range conditions, they can withstand variations in temperatures, and they are easy fleshing cattle that do well grazing without any extra feed. We feel that Herefords are more economical.”

Robert Graham, Holland, Manitoba – “The hair coat and the moderate size make them a cheaper animal to winter. I don’t need to baby them.”

John Lightle, Campbellford, Ontario – “Herefords are easier to look after. They’re more docile, aren’t as hard on fences or equipment, they eat less, can stand the cold weather and make excellent mothers. This all means less work for me.”

Bruce Creith, Pilot Mound, Manitoba – “For me they have been bringing just as high a price but they require less maintenance and upkeep – basically less work for the same money.”

Russell Jans, Tompkins, Saskatchewan – “There’s a pride to having good cattle and you take them to the sale and they bring you top dollar. I’ve seen them pay a nickel more for our straight Hereford steers at more than one place.”

Bob Balog, Balog Auctions, Lethbridge, Alberta – “Hereford is providing the consistency, uniformity, grading results and meat quality the industry is looking for. We had straightbred Hereford feeders selling better than they had for 5 or 6 years last fall. You can’t beat the Hereford cattle on the yearling market. And there is tremendous demand for straightbred Hereford females.”

Bryce Weiss, Maple Creek, Saskatchewan – “The Hereford Charolais steer is one of the premiere steers in the feedlot industry.”

Leonard Finstad, Etzikom, Alberta – “When they go to market, our Herefords provide an even group which is appealing to buyers. They like our cattle for their length, depth and thickness. Herefords also meet the growing demand for marbled beef.”

Michael Allemeier, Teatro’s Fine Dining, Calgary, Alberta – “Hereford is the best quality beef you can offer in this country.”

You can’t be all things to all people

But the same adaptability and versatility that has made the Hereford breed the most widely used British beef breed in the world is enabling practical cattlemen across Canada to use them as straightbreds or crossbreds in virtually any environment.

Origin of the Hereford Breed

The Hereford breed was founded some two and one-half centuries ago as a product of necessity. Thrifty and enterprising farmers near Herefordshire, County of Hereford, England, were determined to produce beef for the expanding food market created by Britain’s industrial revolution. To succeed in Herefordshire, these early-day cattlemen realized they must have cattle which could efficiently convert their native grass to beef and do it at a profit.

There was no breed in existence at the time to fill that need, so the farmers of Herefordshire founded the beef breed that logically became known as Herefords. These early Hereford breeders molded their cattle with the idea in mind of a high yield of beef and efficiency of production, and so firmly fixed these characteristics that they remain today as outstanding characteristics of the breed.

Beginning in 1742 with a bull calf and two cows inherited from his father’s estate, Benjamin Tomkins is credited with founding the Hereford breed. From the start, Mr. Tomkins had as his goals economy in feeding, natural aptitude to grow and gain from grass and grain, rustling ability, hardiness, early maturity and prolificacy, traits that are still of primary importance today.

Other pioneering breeders were to follow the Tomkins’ lead and establish the world-wide renown for the Herefordshire cattle causing their exportation from England to wherever grass grows and beef production is possible.

Herefords in the 1700’s and early 1800’s in England were much larger than today. Many mature Herefords of those days weighed 3,000 pounds or more. Cotmore, a winning show bull and noteworthy sire, weighed 3,900 pounds when shown in 1839. Gradually, the type and conformation changed to less extreme size and weight to get more smoothness, quality and efficiency.

Although they were already occurring naturally, an Iowa lawyer named Warren Gamon is credited with founding Hereford cattle of the polled variety in 1898. He assembled 11 head of polled Herefords in 1900 after sending out inquiries to 2,500 members of the American Hereford Association and receiving 1,500 replies.

Download a PDF of “Good Cattle, Good People, 150 Years of Influence”
The FIRST Canadian Hereford Digest feature on the history of Herefords of Canada.

The Hereford Breed Comes to Canada

Frederick William Stone was a Warwickshire Englishman who is responsible for the introduction of the Hereford breed into Canada. Mr. Stone came to Canada from England in 1831 and settled on 200 acres on the Puslinch Plains, south of where the city of Guelph now stands. He eventually increased his farm to 583 acres.

In 1850 Mr. Stone bought a herd of Shorthorns and four years later began to import breeding stock from England. While he was visiting England in 1860, he attended the English Royal Show at Canterbury and was greatly impressed with the quality of the Herefords shown. As he had to return to Canada he arranged for his brother to buy some of these cattle at an upcoming sale of Lord Bateman. In due course, eight heifers and a young bull arrived in Canada, all of commendable quality. It was Mr. Stone’s intention to show them the following year at the provincial exhibition in London, Ontario as he felt this “would at least attract attention” to the breed. An editorial in an agricultural journal of the day made the comment that Lord Bateman’s renowned Herefords stood unequalled in purity, size and symmetry in England and congratulated Mr. Stone on his purchases.

The first Polled Herefords were imported to Canada in 1903 by Mossom Boyd of Bobcaygeon, Ontario.

Download a PDF of “Good Cattle, Good People, 150 Years of Influence”
The SECOND Canadian Hereford Digest feature on the history of Herefords of Canada.

The Canadian Hereford Association was formed in 1890 with the primary objects of preserving the purity of Hereford cattle, promoting the interests of the importers and breeders of such animals, and collecting, verifying, preserving and publishing the pedigrees of said cattle and other useful Hereford information.

The Canadian Hereford Association has approximately 1500 Annual, Life and Junior members across Canada. It registers 18,000 purebred Herefords annually, which is about 20 percent of the 150,000 registrations processed by the 29 breed associations in Canada.

Download a PDF of “Good Cattle, Good People, 150 Years of Influence”
The THIRD Canadian Hereford Digest feature on the history of Herefords of Canada.

All videos can be found below, along with a PDF of the speakers powerpoint presentation, or you can view them in a larger resolution on YouTube by clicking here.

Go to videos and PDFs 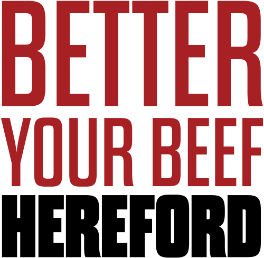